Looking back on the last few weeks or so of my google searches, I find a majority are variations of the following:

If you were to tell me that you were unfamiliar with the phenomena that is Ancient Aliens, I’d have to ask where in the hell you have been. What, pursuing other “real life” activities instead of sitting your ass on the couch watching “experts” explain to you that the line of big stone blocks by some pyramids was QUITE POSSIBLY an alien spacecraft landing strip? Pfft.

When I initially started looking into this disturbance in the force a few weeks ago (yes, this is how I spend my free time), I found nothing, NOTHING online. However, a search today taught me that Netflix removed 800+ hours of History Channel and A&E shows from Netflix. It also found the below question from some poor fool who just needed to ask SOMEBODY on the internet to bring back Ancient Aliens. Kudos to Odin on his helpful and not even sarcastic response. 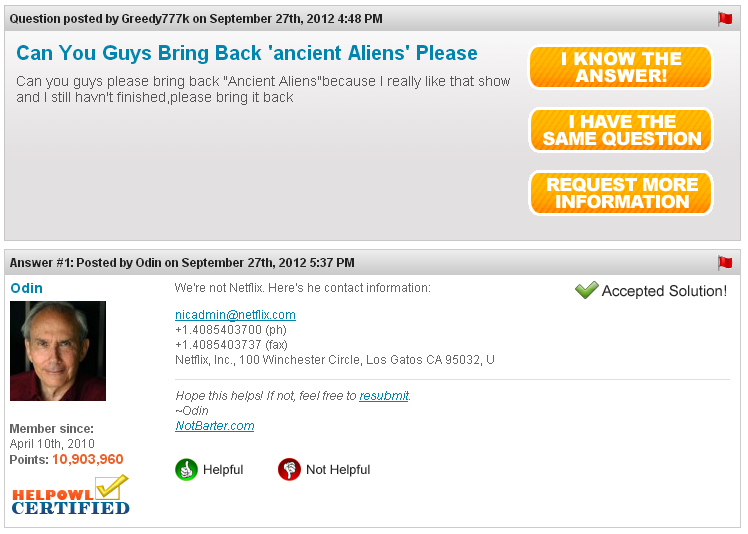 Since Netflix attempted to just smash my hopes and dreams to bits, I went ahead and found and downloaded Ancient Aliens myself. STOP TRYING TO KEEP ME DOWN, THE MAN! After watching season 4 pretty much non-stop, I find myself starting sentences (in my head) with “As some ancient alien theorists suggest…”

Giorgio Tsoukalos, the unintentional figurehead of the Ancient Aliens series, is quite the thing now too. A google search for his name brings up tons of facebook fan pages, including fan pages for his wacko crazy hair itself. An image search is pretty entertaining as well, where you can track how his hair progressed from generally normal to omgwut.

What I’ve also come across is Giorgio’s twitter page and his tour page. OMG TOUR PAGE. Yeah. You can pay to see Giorgio speak about how everything ever is because aliens for only $45. Add $100 to that and you can have a meet & greet in an informal setting (read: a local TGIFriday’s) where you can make yourself brave at a CASH BAR before discussing “everything because aliens” with Giorgio before receiving “a special gift you’ll be able to wear that same night.” Can you technically wear a punch in the face? Because I’d love for that to be the special gift.

Giorgio is speaking tonight in Austin, which is so close yet so… expensive. I won’t be able to make it to receive a free punch in the face, but will do several things tonight and attribute them to “because aliens.” I hope to find somebody who attends this lecture so I can add to my list one more person to live vicariously through.

Also, below is the official Giorgio Tsoukalos tour logo. Hopefully the designer in charge of this got a few solid high fives for getting “Tsoukalicious” approved. Well done. 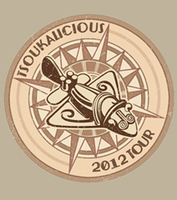