I drive a 2002 Honda Accord. In the 8 years I’ve had it, I’ve managed to rack up 206,000 miles. Recently, I noticed that my brakes were acting weird, feeling funny against my foot when I pressed the pedal. I mostly ignored it, because the brake light indicator hadn’t come on (though I’m not sure it would have mattered, as I currently have 3 dash alert lights that NEVER turn off and that I’m ok with) and because I didn’t hear the terrifying screeching noise that I associate with brakes that are getting ready to stop being brakes. I assured myself that I was just making up the “weird brake feeling,” and since I hadn’t careened off a cliff yet, which is what happens on tv and movies when your brakes don’t work anymore, I thought I was doing pretty ok for myself.

In passing, I mentioned these brake issues to a friend who said he would replace the pads for me. This was a great turn of events, since the main reason I hadn’t gotten them fixed was because I wasn’t too interested in the several hundred dollars worth of expenses that would come with my car being in the shop. Brake pads themselves aren’t that expensive, so I allowed my car to be dismembered by my friend.

A brake pad is a simple enough concept. It smashes up against the rotor, which slows the car down (yes, that’s the technical explanation). As you use the brake pad, it wears down, at which point you have to replace it. These are things I learned. Look how smart I am.

Here’s a picture of some new brake pads. 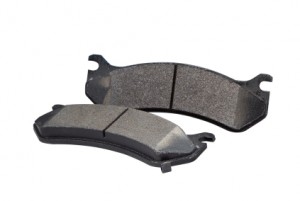 Well, when I took my car in last to get new tires a few months ago, the car shop let me know that my pads were down to 1mm or something. I mostly ignored them, because I don’t operate in millimeters. This is ‘MERICA and we operate in inches. Also, since I hardly know anything about cars, 1mm means nothing to me except that maybe I should be concerned because those guys seemed concerned, though maybe they just wanted to sell me some brake pads along with a fresh pint of headlight fluid because I don’t know aaaanything about cars because I’m just a giiiiirl (hey, that’s actually kinda true!). Either way, it was easy enough to ignore.

When my friend finally removed the brake pads from my car, this is what he found. 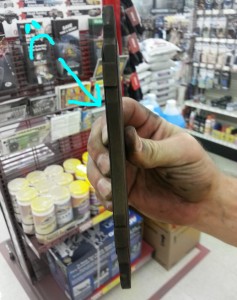 Oops. So, apparently, since the pads that used to be there were ground down to nothing, my car was not really braking anymore, just kinda grinding along until it slowed to a stop. Not great, but at least I really used those brakes to the last drop, eh? And actually probably a few gallons past the last drop too. The point here is that I’m efficient, which you can’t afford NOT to be in this day and age. Luckily, my rotors weren’t ruined, which is where the big bucks come in, and friend was able to just pop some new brake pads in.

The guy at O’Reilly’s told me the new brake pads that I bought had a lifetime warranty, so if they started to wear down I could just bring them in to be replaced, but not if I wore them down like I did to this set. Ok DAD. Geez. He resisted, but eventually mumbled a “right” after my persistent questioning of “So you’re saying that I NEVER have to buy brake pads AGAIN then?”

Anyway, my brakes are fixed and my car now has 100% stopping ability again. Looks like my brakes are good for another 200k or so, huh? The highways are marginally safer — you’re welcome, San Antonio.

Special thanks to dear sweet Marcos for all his brakey knowledge. Marcos, every time I slam on my brakes to successfully avoid ramming into the back of a car who cut me off, because he was acting like a real dick, I’ll think of you!