In searching and searching for an old dog toy I was seeking to replace, I found a Chinese website that showed a picture of that EXACT hard-to-find vinyl football. I checked the dimensions, saw 12x7x7 and thought that while maybe slightly bigger than I was thinking it was, that was probably about the right size when you included the nubs all over the ball. I placed the order and forgot about it, as I so commonly do with my constant impulse online purchases.

Fast forward a few weeks to yesterday. I checked my mail and was surprised to see that, along with the junk mail I was expecting to clear out of the mailbox, there was a small, very well taped package. Listed as its origin was Singapore, and it had “gift” handwritten on one of the labels. I had ordered something maybe from China, I vaguely remembered, but it definitely wasn’t going to be coming to me in a box that would fit in one hand. How did this person in Singapore get my address and what in the hell are they sending me as a gift and why?!?
I stopped.
As calmly as I could, I carefully raised the small box to my head and listened. No ticking. Sweet. Back to my mannerisms being reckless and sloppy, I gathered the junk mail from the box and hauled all my crap inside, confident that I would not immediately be killed by this package that just reeked of stranger danger.
I grabbed my scissors and the package and, for whatever reason, went out into the backyard. I carefully cut open the taped package, very aware of whether I was letting any of the flaps lift up as they were being unfastened. Looking back, I suppose the reason I went outside was that I thought that if I was going to blow myself up with a bomb in a package that some person from Singapore sent me, I’d best not get myself all over the sofa.
I lifted the corner of one of the flaps slowly and peeked. Lots of bubble wrap in there… Do pressure-sensitive bombs get wrapped in bubble wrap? This is something I am unfamiliar with and just did not have the time to google right then. I decided to just go for it and opened the flaps, and pulled out the item wrapped with bubble wrap (breathing slightly shallower than usual, so as to not inhale any white powdery substances that may or may not be coating the package and trying to poison me). After a few seconds, I figured it out. SON OF A BITCH. 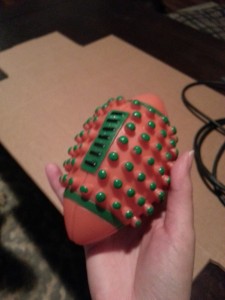 While this football looks EXACTLY like the one I want, it is at least half the size of what I was thinking I had bought. Furious (yet relieved at the non-explosive way things turned out), I went back to the website to double check the item listing and prepare to report this stupid website for jerks to the BBB of Asia. But… damn. There it was, kinda plain as day: 12x7x7 cm. Apparently it wasn’t plain enough for me, though. Stupid website, why are you using centimeters to measure all the things?!
So, now I have a tiny football that looks EXACTLY like the one I was intending to buy, but smaller. Also, it squeaks. The squeaks sound exactly like what I’d think a football’s taunting would sound like.
Back to fruitlessly searching the internet…
Incidentally, if anyone can find somewhere to purchase this same football but BIGGER (I think it was at least 9″ (THAT’S INCHES) long), help a girl out and send the link over, would ya? I’m pretty good at the internet yet have turned up nothing. It’s driving me NUTS. Masters of the web, consider this a challenge. Count color differences a non-issue in your search—any color scheme will do. Here’s a photo of the packaging that came with it, even. HALP! (I’ve send a request to their email address, but have not yet received a response)
PS – Why would I even think anyone would send me threatening packages? I’ve never done anything mean to anyone who lives in China, and I don’t feel like I really have anything more than an angry scowl “coming to me.” Is it just healthy skepticism to assume that an unrecognized parcel in your mailbox is a threat to your life? … probably not, I’d guess. So anyway, none of you guys send me bombs BECAUSE I’M TOTALLY READY FOR IT!