So, I have a pig living in my backyard. One of my friends is moving to a new house and Napoleon the pig needed a place to stay while he moved and settled in.  I volunteered because I’ m a nice person and a super duper friend, but mostly I thought it’d be fun to have a temporary pig and entertaining to watch how my dogs played with pig (ps, it is entertaining — here are videos of Napoleon meeting Kona and Nani for the first time).

I was a little concerned about the recent cool snap and how Napoleon would handle it since he’s got very little fur on his little pig body to keep him warm. However, I got over that quickly, since I figured that since he’s a farm animal he’s probably built to handle a little less than perfectly temperate climates. I forgot about it and was sure he’d be fine in his dog house, since it has a little fabric dog bed inside as well as some hay. Apparently, that wasn’t enough.

As I was sitting in my room Sunday afternoon (the day that the temperature dropped), I heard a little bit of a ruckus coming from outside. I ignored it, as I usually do (you have to learn to ignore some ruckus when you have two idiot dogs living with you), until I heard a larger ruckus. I got up to see what the commotion was, and I found this: 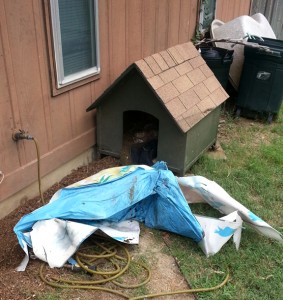 Napoleon had decided that he wanted a pool in his front yard, so he dragged over the busted up baby pool from the other side of the yard. He probably pulled the pool 20 feet to where I found it. “But maybe the wind blew it over there,” you say… and I might have thought that too if I hadn’t seen him scurrying away from the scene of the crime right after I got outside. I picked up the pool and the scraps of plastic that had broken away from it and stuffed it in the garbage — sorry, Pig; the last thing I need is plastic scraps all over more of my yard than they already are. I noticed that he had already pulled a fleece blanket that had been airing out on the deck into his house, so I threw in an old terrycloth robe as well to keep him warm.

I headed back inside and was a little more reactive when I heard another ruckus outside. I jumped up and ran out as quickly as I could… where I saw this: 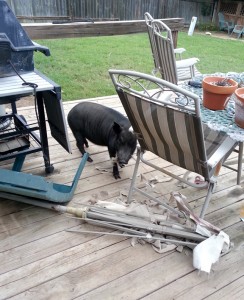 Yep – that’s an old fabric umbrella, the kind that is supposed to shade a patio table. It had seen better days, and tended to get blown away in big storms, so I had it laying on the ground on the side of the deck. Napoleon decided that this was also a great potential addition to his home, so he relocated it. Already in the doghouse and across the area where he had dragged it were scraps of the most of the umbrella that he tore off and placed in his house. I guess it’s like emptying your clothes out of the drawers before you move your dresser. His issue came when the umbrella got stuck between the BBQ pit and my patio furniture. Pig was trying very hard to get that umbrella to his house, though — if you look closely at that photo, you can see motion blur from his little head pull pull pulling so hard. I released the umbrella from his vicious pig-mouth and put it outside the fence as well and went back inside, agitated.

Cue ruckus three… I heard a different noise, this time right outside my bedroom windows. I looked out and saw the trellis wiggling around, so I mostly knew what to expect as I flew to the backyard. Unfortunately, the damage had already been done and Pig had some new greenery to decorate his home… the flowering vines that had been growing so nice and tall against my house. 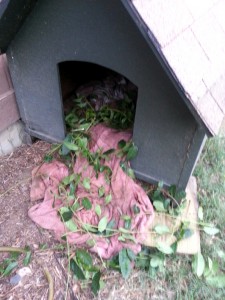 The pink fabric that’s under the vines is the terrycloth robe I put in the doghouse. He decided that it wasn’t up to snuff in his world of pig design and shoved it out with his picky-ass pig nose. I decided to leave the vines in there, on the chance that if I left SOMETHING there, he’d stop playing Hungry Hungry Hippos with all the things in my yard.

When I went outside this morning, I didn’t find anything else crammed in his house, but it was still early in the day. I’m hoping the weather warms up just a little bit so I have some time to scrape up some hay or to find some more old towels to fill his house before he decides it’s time to redecorate again.

Well, I did want to know what it was like to have a pig…  stupid pig.