The internet is a wicked thing. It can help convince you that your headache combined with an ant bite on your toe-web is actually a rare form of cancer. It can ruin your whole day through obsessive learning through a wikipedia link spiral or, less constructively, an entertaining youtube channel. What the internet showed me to fuel my crazy was this video. In it, a pissed-off gentleman is showing his living room that has been smeared with dog crap. Apparently, his dog pooped in the house before his Roomba was scheduled to do its daily cleaning. Roomba ran over the poop and continued its job, unaware (or possibly very aware and just being a bitch about it) that it was smearing shit all over this guy’s house. Since then, though my dogs had very rarely pooped in the house during the day (overnight is a different story, that story being about spiteful jerky dogs), I have been paranoid and terrified that this would happen with my own dear sweet Roomba.

So, by now you should know where this story is going.

I arrived home from work one day, and along with being greeted by my very excited dogs, I was greeted by the faint smell of dog shit. Super. As I stepped into the living room, I saw Roomba stopped in the middle of the floor. I wondered why she would stop there, because Roomba will continue buzzing around until she’s worn out, then retire to her dock until her next shift. As I got closer, I thought maybe she had run over a dog toy and gotten stuck on top of it, as she had a few times before. A few steps closer and… yep… that faint smell of dog shit wasn’t so faint anymore as I realized that she had gotten jammed up on a pile of dog crap. My dog Kona leaves gigantic piles of poop wherever she pleases, so that’s what had been left in the middle of my living room rug. After the first glancing blow with that pile of poop (and subsequent smearing around), Roomba made her way back to said pile and tried to finish “cleaning” it up. Luckily (?) that pile was so big that Roomba just pushed and pushed trying to get on top of it and finally gave up. It was kinda like this. 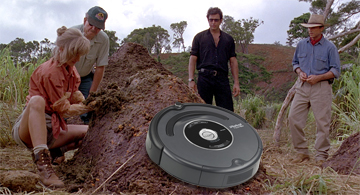 After staring for a minute or so in defeat at the disaster in my living room, I finally picked Roomba up and put her outside. I only took one photo of the mess after I put Roomba outside because I was having a group of people over to my house in less than two hours. Here’s the photo, if you’re keen to see what Roomba did to my living room rug (slightly blurry because I didn’t care about holding the camera still, what with all the rage I was holding in). It could have been way worse, yes. That’s the only thing that kept me from putting Roomba under a running faucet in punishment—the knowledge that it could have been worse.

Another bit of fun was actually giving Roomba a (now) much-needed bath. There was poop in her wheels, on the brushes, and on the bumper (that ultimately was the lifesaver of the whole situation). After some initial grossout-edness, I donned a pair of heavy rubber gloves, a roll of paper towels, bleach spray, and got to work. I dismantled what I could and, literally and figuratively, cleaned the shit out of that thing. I am now far less hesitant about handling dog poop, and I’m not sure that’s a great thing but perhaps it’s a marketable talent somehow.

Since then, I have adjusted Roomba’s scheduled clean-time for shortly after I leave the house in the morning. Lesson learned, you mechanical bitch.