Tonight, I returned the Chevy Sonic that I had been borrowing for a week. Since it was a 2013, it had tons of bells and whistles… or at least way more than my 2002 Accord. Now, I love my Accord – I really do. It’s just that any upgrades I’ve put into it have been minimal (read: nonexistent), so I felt like I was living in the future while driving in the Sonic. I was reminded several times by passengers in the car that I was not driving in the future, but moreso just in contemporary times.

Thinking of little Sonic, far away in an unfamiliar parking space at the dealer, makes me sad. Also, getting in my own crusty old car tomorrow morning is going to make me sad as well.

I’ve been comparing in my head my car from the dark ages when a Bush was President and gas cost $1.34 per gallon (thanks, Google!) to the little magic transport vehicle (aka 2013 Chevy Sonic) that I’ve been driving for the last week. Here’s what I’ve come up with:

– Music:
Sonic – XM, secret hatch with hidden ipod connection, bluetooth audio paired from phone. Basically anything I could want, musically, ever.
02 Accord – Matchbox20 CD, a few Lady Gaga CDs, some Broadway soundtracks. Several embarrassing mix CDs from college that I (embarrassingly) still kinda want to listen to. Various cables splayed about and maybe 2 FM transmitters that I don’t throw away because I pretend that they might actually start working at some point. Audio from my phone if I turn it up and hold it up to my head. Point: Sonic.

– Navigation:
Sonic – OnStar turn by turn, activated by me pushing the button and telling the person where I want to go. They then send the turn by turn nav into my car speakers.
02 Accord – GoogleMaps navigation, activated by me squinting while trying to remember where exactly I needed to go and flipping back to whatever webpage I found that gave me the address I needed. Good until I make a sharp turn and the phone slides off my lap and under the seat. Point: tied, unless I’m on a road with curves and turns. Then point Sonic.

– Remote start:
Sonic – lock the car with the alarm fob, hold down the remote start button for a second, and it starts. Car starts to warm up, is not a freezing (or hot like fire) death cage when I get in.
02 Accord – hold down the button on the alarm fob, nothing happens. Hold it harder, stare a bit, shake the keys… get in, start the car. Find wintertime driving mittens. Point: Sonic.

– Sunroof:
Sonic – none (or, at least the one I got to drive).
02 Accord – YES! Point: Accord! (this isn’t really an important thing, and I probably haven’t even opened my sunroof in 6 months, but I felt guilty and thought Accord needed to win a point).

– Diagnostics:
Sonic – with the OnStar, if a dash light comes on, you’ll get a diagnostic email telling you that your oil needs to be changed, or the gas cap isn’t closed all the way, or if your emissions, airbags, or brakes are causing that flag.
02 Accord – if a dash light comes on, said dash light will stay on until that dash light burns out. My current night lights in my car are the check engine, TCS, and sometimes the airbag light. Everything seems to be ok enough. Point: Sonic, unless you’re afraid of the dark or really enjoy Christmas lights – then point Accord.

Little Sonic was a blast to drive, and it was tough to give it back (the key ring may have gotten stuck in my sweater knit, adding to that difficulty in giving it back). Mr Chevy is a real sweetheart for letting me drive little Sonic around for a week – thank you!

In the meantime, back to little Accord, who will be just fine until I decide I’m willing to take on another car payment again… or until the engine just straight up falls out. That’s probably an actual possibility as well. 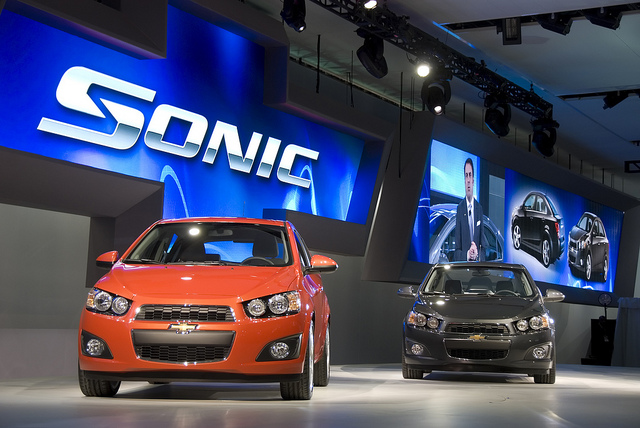