Questions that nag in my mind while I’m waiting for sleep to come:
– Exactly how long did I spend tonight staring at Reddit Is Fun on my phone, watching gifs of puppies bonk each other on the nose instead of scrubbing my bathtubs like I know I should?
– How many hours this week have I wasted playing Candy Crush?
– What exactly am I using my phone for that I feel the need to have it by my side at all times?
– And finally: are these questions to which I actually want to know the answers?
I stumbled across an app that can possibly shame me into using my phone less and exploring my real-life surroundings a little more instead. Frequency is a free app that runs in the background of your Android phone and keeps track of how often you’re crushing candy, reading emails, or ignoring your lunch companions while texting. You can display app usage by day, week, month, the last 3 months, or all time. Time will tell if any of the longer options make me mourn my time wasted and uninstall everything but phone and calendar.If you’re a phone addict and install this app, you need to be prepared to face a wholly depressing graph of where your time has been wasted… I don’t think I’m prepared.After just over a week…
Good news: I didn’t spend nearly as much time on Candy Crush as I thought I would (1:28hrs).
Bad news: … because I discovered a game called Threes that has basically taken up any extra time I might have had as well as drawn my attention from whatever Netflick I watched while lazing around (good God, a jaw dropping 13:17hrs). Ouch. To be fair, much of that was played while watching House of Cards. I’m quite the multitasker, you know.
Good news: I only spent 1:01hr on Netflix on my phone.
Bad news: … which is a bummer, since the only time I watch Netflix on my phone is while doing cardio at the gym. That number should be way higher. More mobile Netflix, less laying-in-bed Netflix!
Reddit took up an hour of my time and my twitter app (Falcon) only took up about 2 hours of browse-time, which isn’t bad. Over the week, nearly 4 hours was spent in my texting/hangouts app, compared to only just over an hour talking to people on the actual phone with my real life mouth.
Oy. Kinda sad. I should be shamed into doing more productive stuff, but instead, I’ll prob just keep playing Threes until I get to a score that I feel is an acceptable quitting point (my high score currently stands at 8,032). Apparently, it takes a lot to shame me into something. At least now I’m AWARE of how much time I’m wasting. 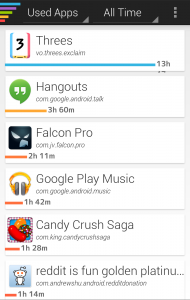 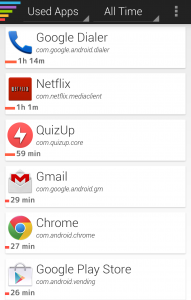 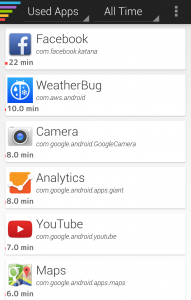